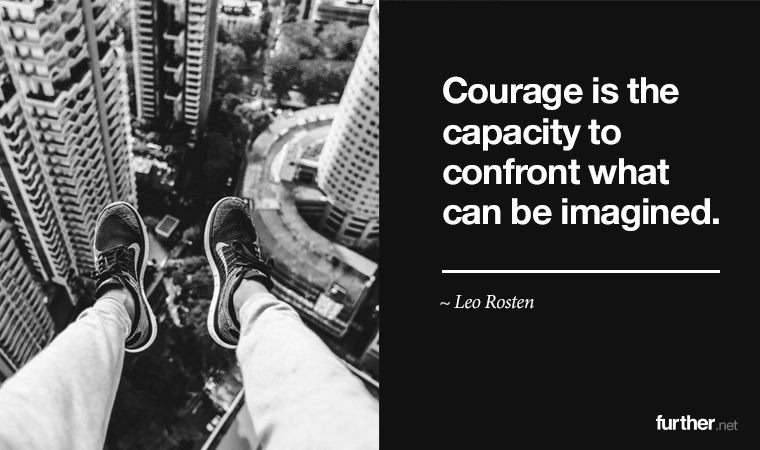 You’re a solidly rational person, right? No magical thinking for you, no sir.

For example, you don’t:

Well, if you don’t … you’re rare. These types of superstitions and other forms of “magical thinking” seem to be an inherent aspect of being human.

You might say that things like this are a bit childish, but mostly harmless. What if I told you that they are also healthy cognitive tricks that buffer us against anxiety and uncertainty, and can even make us more courageous?

Courage is taking action despite the presence of fear. But most of the time, there’s no true threat of immediate physical danger, no threat of a loss of someone or something dear to us … actually nothing there at all.

What we most commonly experience as fear is actually anxiety, a less fundamental emotion that arises purely from our own thoughts, not external reality. Anxiety is often a fairy tale we tell ourselves that keeps us from doing what we really want.

So, why not fight that particular fairy tale with another? Research shows that’s exactly what might do the “magical” trick.

When you think of a “good luck charm,” the rabbit’s foot may come to mind if you live in the United States (not so lucky for the rabbit, apparently). This is a somewhat morbid form of talisman, which includes religious symbols, a special crystal, or perhaps your lucky underwear.

According to the book The Courage Quotient: How Science Can Make You Braver, a German research team found that these good luck objects consistently boosted test subjects confidence and performance across a myriad of physical and mental tasks. In fact, people with a lucky charm performed significantly better than those without one.

Having a lucky charm will not only boost your cognitive abilities, the same research shows that it could improve your golf game. So don’t forget the ol’ Billy Baroo the next time you hit the links.

Make Your Own Luck

Research also cited in The Courage Quotient finds that those in the latter group tend to indeed experience more positive outcomes, but there’s really nothing magical about it. These people “think of luck as a stable factor, as a resource they can count on, [and] are more likely to experience a sense of personal agency, a can-do attitude.”

In other words, they think they can, so they do. Start believing that you make your own luck, and you might get lucky.

As modern people, we’re statistically safer from true harm than ever before in history. And yet, we operate in an environment that tends to breed rampant anxiety.

Telling yourself it’s all in your head is a start, and part of a solid long-term strategy to reduce your overall level of fear and anxiety. But the other way is to do whatever works for you to increase your willingness to act despite fear, even if it’s steeped in superstition.

Maybe lay off the rabbit appendages, though?

“The foods that we crave when we’re anxious tend to be feel-good foods loaded with sugar and/or fat like chocolate, candy, cookies, ice cream and salty chips. Research conducted at Yale University School of Medicine suggests that stress is a risk factor for obesity and it alters our brain chemistry to make us want more and more highly palatable foods, similar to a drug or alcohol addiction.

“Einstein had to work a job to support his family while earning his PhD (an exhausting turn of bad luck), but his career from university to graduate degree to professorship still followed a pretty standard trajectory and timeline …. Einstein was brilliant and original, but until he finished a full graduate education, he didn’t know enough physics to advance it.”

Einstein Was Boring Before He Was Brilliant

Quoting the Last Paragraph for Those Who Can’t Wait

“Putting this all together, then, if you need to help yourself wait for a larger option in the future, it is helpful to wait as long as possible to make the decision between the options. The waiting period does not make you more patient, but it does increase your sense of the value of the distant option. That can help you choose that larger option.”

Here’s to everyone having a fantastic week. And in case you’d like everyone to include your friends and colleagues, here are some handy sharing links: