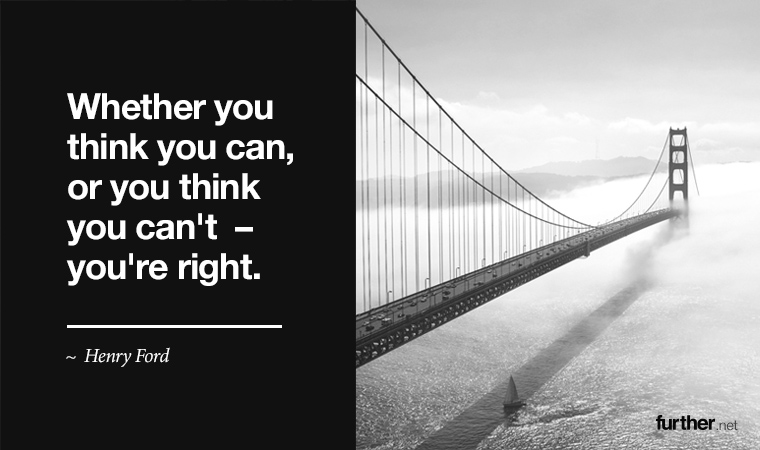 You could always count on ol’ Henry Ford for a few things, notably black horseless carraiges and pithy quotes. The citation above is one of his most famous and ubiquitous motivational sayings.

And, it turns out, he was exactly right. Extensive studies into human psychology show that what we believe about our ability to accomplish something largely determines whether we in fact can accomplish it, and whether we’ll even try.

The psychological term behind the Galatea effect is self-efficacy, which means the extent or strength of your belief in your own ability to complete tasks and reach goals. In a nutshell, Henry Ford nailed it: whether you think you can or you can’t, you’re right.

So, does this take us back to wishful positive thinking that’s been proven to be ineffective? No, because simply telling yourself you can do it is not the same as truly believing it or having a realistic methodology to get it done.

One way to gain the necessary confidence that you can accomplish what you want to do is the modeling or “vicarious experience” approach, in which you look to someone similar to you who succeeds at the task. Subway enjoyed huge success with their “Jared” advertising campaign, simply because people said to themselves, “If he can lose all that weight, so can I.”

An even more effective approach is “enactive attainment,” which is a fancy way of saying that when you succeed at a task, you gain additional confidence in performing the task in the future. Sounds circular, but there’s a smart way to make this form of self-fulfilling prophecy happen for us, no matter what the goal.

It begins with a mindset of continual improvement. Then you develop new micro-habits in the pursuit of incremental change over time, with all those small steps building your self-efficacy along the way to a major transformation and a greater elevation in confidence. You can read more about that process here.

Henry Ford had something to say about this approach as well:

“Nothing is particularly hard if you divide it into small jobs.”

When you’re pushing yourself further, you need some form of realistic plan that creates true confidence that the goal is attainable. By laying the right groundwork and taking small steps in the right direction, you’ll find that you do believe that you can do it … and so you do.

“I decided to be really honest with myself. I asked myself: What is really going to work? What is going to keep me on track? To me, the answer was obvious: I needed a babysitter. I met Mike, and I knew he wouldn’t let me get away with anything. The decision was made.”

The One Question That Finally Changed How I Approach My Health

“Too many people limit their happiness and success by assuming that taking time off from work will send a negative message to their manager and slow their career advancement. But new research, says that the exact opposite is true. Taking a vacation can actually increase the likelihood of getting a raise or a promotion.”

Also, if you’re an employer:

“If your employees take time off, they will perform better. In his book The Happiness Advantage, Achor mentions research that found when “the brain can think positively, productivity improves by 31 percent, sales increase by 37 percent, and creativity and revenues can triple.”

Buying Things Does Not Make You Happy, Science Says

“It’s been determined way beyond reasonable doubt that experiences are more likely than material goods to lead to happiness. Since this new truth was first unearthed back in 2003 by psychologists Tom Gilovich and Leaf Van Boven, pioneering researchers have been joining the dots of previous work and conducting new studies to work out why: why are experiences so much better than material goods at making us happy?”

The 7 Reasons That Science Says You Should Pay For Experience, Not Things

Further is a day late this week for the first time since I started it. I’ve been laid up for the last few days with a nasty case of vertigo, which I also suffered from in early 2014. It’s not fun, to say the least. Hopefully this gets cleared up and we’re back on track next week.

If you enjoyed this week’s issue, mind forwarding to a friend or sharing on your favorite network?