Are You Brave Enough to Live the Life You Want? 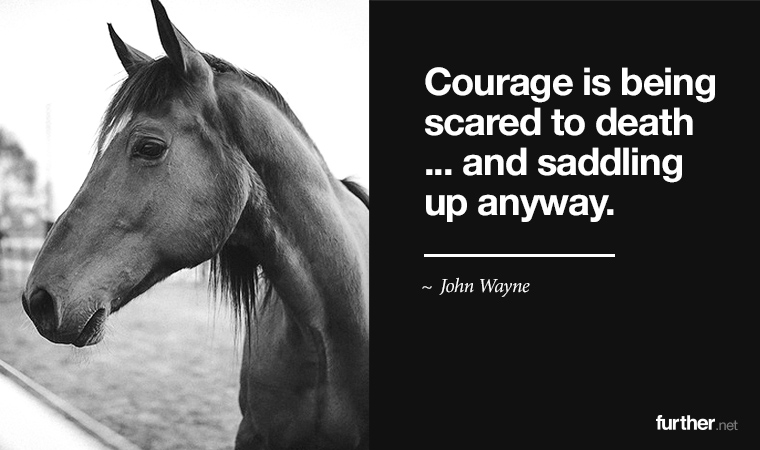 What comes to mind when you hear the word courage? It might be someone racing into a burning building to rescue a child, or someone else committing an act of civil disobedience to protest injustice.

Courage is indispensable to living your best life. It allows you to overcome obstacles, act in accordance with your core values, and experience substantial personal growth.

As we’ll see, courage comes in sizes big and small, heroic and personal. Most importantly, courage is not the absence of fear … it’s taking action despite fear.

In his book The Courage Quotient: How Science Can Make You Braver, Robert Biswas-Diener defines courage as “the willingness to act even in the presence of fear, risk, and threat.” This is not limited to physical risk, but instead applies to any situation in which you take action despite intimidating circumstances.

Personal courage is different. Something may be scary to you, but not necessarily to others. So, you exhibit personal courage if you overcome a personal limitation, such as traveling by plane despite a strong fear of flying.

Biswas-Diener puts it this way:

“We may not all be likely to climb into a burning vehicle to save an accident victim, but each of us has the potential to face down our own psychological demons, overcome them, and get on with the business of living.”

We’ve seen that pushing ourselves further through personal projects and quests is how to find happiness without looking for it. And frankly, if you’re pushing yourself out of your comfort zone, you should feel a bit of intimidation (otherwise, you’re not really pushing).

The problem begins when that natural tinge of fear leads to procrastination or a flat out refusal to begin. In the realm of creative projects, author Steven Pressfield calls this Resistance, and it applies to any attempt to go further, whether physically, mentally, or spiritually.

You say you’ll start when you’re ready, which often means when the fear is gone. But in order to eliminate fear and gain confidence on the path to mastery, you have to start despite the intimidation. Otherwise, you’re stuck.

Research show that courage is not a genetic predisposition. It’s something that we accumulate over the course of our lives by facing our personal fears and transcending them.

Bravery is a character trait that is learned by increasing your willingness to act in the face of fear. So, to the extend that your most important goal is the thing that’s intimidating you, stare it down and knock it our first thing each day.

In other words, it’s time to saddle up.

The “courage quotient” in Biswas-Diener’s book refers to the ratio of your general level of fear (anxiety) to your willingness to act, as determined by questions that rate your personal level of each. Turns out that I’m high on anxiety levels and the willingness to act, which means I’m always somewhat afraid, but proceed anyway.

As usual, I sound pretty crazy to me. 😉

“Weight-conscious consumers are often drawn to foods such as Clif Bars and Wheaties, whose packaging suggests that they promote fitness. But according to a new study, such “fitness branding” encourages consumers to eat more of those foods and to exercise less, potentially undermining their efforts to lose or control their weight.”

‘Fitness’ foods may cause consumers to eat more, exercise less

The art of business inspired by art

“Research finds that unusually creative people have the ability to shut down the brain’s habitual responses, and let go of conventional solutions. This allows them to come up with new, creative thoughts — including those sudden flashes of insight and Aha! moments, when you come up an amazing marketing or business idea.”

Inspire Your Creativity With These Three Simple Habits

You should read this … really.

“For all avid readers who have been self-medicating with great books their entire lives, it comes as no surprise that reading books can be good for your mental health and your relationships with others, but exactly why and how is now becoming clearer, thanks to new research on reading’s effects on the brain.”

That’s it for this week. If you’re digging Further, make sure to share early and share often: