We Have the Meats! (And the Cancer) 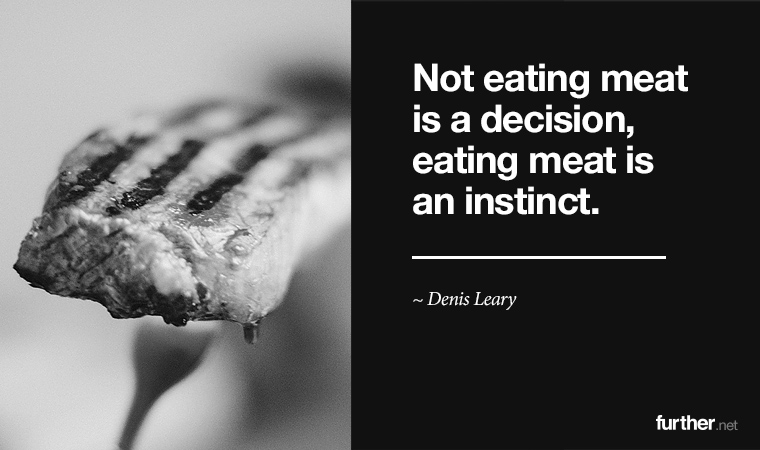 So, if you have’t heard this news yet, you’re probably hiding out in a cave, gnawing on the flesh of a fresh kill. Drop the bone, back away, and listen up.

The World Health Organization announced that “eating processed meat like hot dogs, ham and bacon raises the risk of colon cancer.” Plus, eating red meat in general “probably” isn’t that good for you either.

First of all, this isn’t all that shocking. Processed foods of any kind are not good for you, so why would we assume that man-handled animal flesh is any better? Plus, I recall quitting the consumption of red meat (for a while) back in the late 80s because it was considered less healthy than other choices.

The reaction to the news has been all over the place. CNN quickly seized the opportunity to espouse the virtues of the Mediterranean Diet as the easy solution. While the high fruit and vegetable, low meat diet has been a favorite among health enthusiasts for decades, it’s recently gotten more press than Kanye at the VMAs.

As always, it’s not that simple. Yes, the Mediterranean Diet seems to be a sensible approach (eat real food, not too much, mostly plants), but there’s more to it than that.

Four days before the WHO rocked bacon fetishists and BBQ aficionados everywhere, the New York Times ran a piece advocating the Mediterranean lifestyle, not just the diet. Check this quote:

“They were surprised by how the people they encountered enjoyed and savored their food, turning every meal into an excuse for a social occasion with friends and family. They noticed that people spent a lot of time outdoors getting fresh air. Instead of designating daily periods of time to jog or exercise, they engaged in a great deal of leisurely physical activity like walking and riding bicycles. And they seemed to have low levels of chronic stress.”

The problem is more likely about the way we live and the things we consider reasonable. That, plus what we put in our bodies, will determine how long we stick around this place.

No, this is not a self-help guide for Nickelback fans. If the news about meat wasn’t bad enough, now you’ve got to consider your fromage intake. “Cheese contains a chemical found in addictive drugs, scientists have found.”

The Zen of Sleep

We know mindfulness has a host of benefits, including better sleep. Here’s a deep dive into why meditation practice can have you sleeping like a baby, which alone is probably good enough for me.

Get a Brain Lift

“Exercise is good for the brain. We know that. But most studies of exercise and brain health have focused on the effects of running, walking or other aerobic activities. Now a new experiment suggests that light resistance training may also slow the age-related shrinking of some parts of our brains.”

Lifting Weights, Twice a Week, May Aid the Brain

I run a company of 60 smart people who are located all over the world, and other people wonder how it works. I, in turn, wonder why anyone would let geography dictate the best person for the job, only to pay a small fortune to stick everyone in the same ugly office space.

Why distributed workforces will win

When Keeping It Real Goes Wrong

Authenticity is the most overused, least understood business concept of the last decade, but that didn’t stop everyone and their hipster dog from claiming it. Looks like the party’s over, and you’ll have to start being real instead of just claiming it.

The Easiest Way to Get Your Own Executive Bathroom

“These experiences reinforce my belief that for professions that require creativity, our notion of what constitutes an “office” is one that can and should be productively expanded.”

The Power of the Outdoor Office

We know how important confidence can be to every aspect of your life, especially when it comes to how people perceive you. Despite the listicle title, this article has some solid tips for improving your poise.

Another title that doesn’t do the content justice, this is not about publishing a massively popular website. It’s about the life lessons gleaned from the substance of the website, and it’s well worth your time.

Learnings from 9 Years of Brain Pickings

“A study of brain imaging reveals how neural responses to different types of music really affect the emotion regulation of persons – especially in men, who process negative feelings with music and react negatively to aggressive and sad music, according to the findings.”