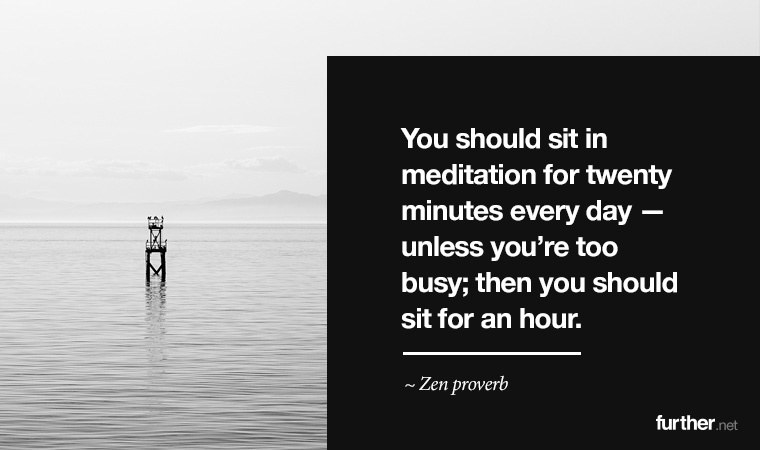 2,500 years ago (give or take), a guy named Siddhārtha Gautama (aka the Buddha) sat beneath a pipal tree in a meditative state until achieving enlightenment. From this event sprung the non-theistic tradition known as Buddhism, with meditation as the central practice that allows one to transcend the inherent suffering of life.

Outside of the counterculture movement of the 1960s and the new age community, meditation had never really caught on in the West. Now, however, you’ve got Silicon Valley overachievers, US congressmen, elite athletes, and the Marine Corp adopting and endorsing the practice.

It doesn’t hurt that over 3,000 peer-reviewed studies have been conducted on the topic of meditation and mindfulness. The research shows that the practice can improve your general well being, reduce depression, anxiety and stress, increase productivity, improve self control, and even change the composition of your brain for the better.

That said, about 90% of Americans don’t meditate. Other research shows some people prefer an electric shock to being alone with their thoughts. But I’m guessing that most are just skeptical that this is all another passing fad.

If you’re a skeptic, yet intrigued by the benefits that meditation can bring, I recommend you read 10% Happier: How I Tamed the Voice in My Head, Reduced Stress Without Losing My Edge, and Found Self-Help That Actually Works by Dan Harris. You may know Harris as a Nightline anchor and weekend co-host of Good Morning America, and trust me, his initial skepticism likely puts yours to shame.

After experiencing a personal and professional crisis, Harris encounters the work of mindfulness gurus Eckhart Tolle and Deepak Chopra, and despite being intrigued, worries that they may be completely insane. Even after beginning the practice of meditation and reaping the initial benefits, Harris remains hard-nosed. For example, his chapter covering the practice of “loving kindness” meditation is entitled The Self-Interested Case for Not Being a Dick.

The book is a quick-paced and entertaining read, even as it makes the case why everyone can benefit from meditation. As you travel from the beginning to the epilogue, you’ll recognize a man who has been transformed by much more than 10%, even as he continues to distance himself from any hint of magical thinking or mysticism.

Of course, the growing mainstream acceptance of meditation for purely secular benefits is already prompting a backlash from purists. McMindfulness — “the marketing of mindfulness practice as a commodity that is sold like any other commodity in our brand culture” — has critics concerned that new practitioners are missing the essential point about the perils of attachment that the Buddha made all those years ago.

My take? If you’re doing it correctly, meditation and mindfulness practice will set you on the path to finding out who you really are and what really matters. And that’s been the point all along.

I’m mindful of the fact that I tend to go on and on. Let’s see what else is happening.

Seems like all we heard in 2014 regarding diet was “plant-based” versus “paleo,” i.e. hippies versus cavemen. As we’ll see in the next issue of Further, this “battle” is silly in more ways than one. Here’s an appetizer: 7 Common Misconceptions About The Paleo Diet.

Some interesting history (and a really cringe-worthy exercise video from the 1950s), plus 5 smart points about keeping it simple when it comes to working out: We make exercise way too complicated. Here’s how to get it right.

In the spirit of keeping it simple, here are three things you should also be doing (with scientific backing and everything):

My favorite wealth-building tip? Generosity. I’ve been a founder in eight successful companies (so far … you know, gotta go further), and each one was predicated on giving before selling.

If that’s not good enough, University of Pennsylvania Wharton School Professor and bestselling author Adam Grant has the research that shows that givers are the most successful people in business – as long as they don’t allow themselves to be taken advantage of. Grant’s book Give and Take is not bad, although it goes a bit long for the topic. Get a feel first from these free resources:

If generosity’s not your thing, how about vulnerability? Why Vulnerability Will Make You More Successful in 2015.

Okay, maybe you’ve got generosity and vulnerability down, but you’re a productivity person. And yet, procrastination gets in the way of taking your career, your business, and your bank account to the next level. Try these mind tricks to hit those deadlines.

It’s the beginning of a new year, and we’re all feeling the pressure to achieve the magnificent goals we’ve set for ourselves. Mostly, we set ourselves up for failure by not being realistic, but also by failing to realize how big changes happen — one small step at a time. So, let’s get wise about going further with a few smart ideas.

First, if you’re not screwing up, you’re not growing. And yet mistakes (and the mere idea of making mistakes) are the number one reason why we embrace the status quo that we swore to change. How to Give Yourself the Freedom to Make Mistakes.

Second, instead of trying to get motivation, go for momentum. The motivation will naturally follow once you start moving forward, even if slowly. 3 Magic Words to Overcome Overwhelm.

Finally, the way to do big things, whether get in shape, start a business, or unleash your creativity, is to do something small, every day.

There seems to be some debate about whether the Buddha ever said this, but it’s a good one anyway:

“There are only two mistakes one can make on the road to truth: not going all the way, and not starting.”

So, get started on whatever’s important to you in 2015, and beyond. One tiny thing a day adds up to a whole lot of awesome in the future. Another thing that’s awesome is recommending Further to someone you think might enjoy it. Trust me on that one. 🙂