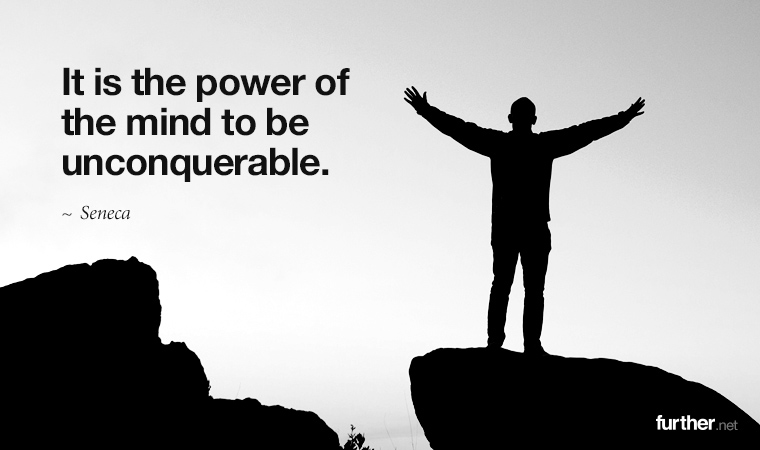 We're amazed and inspired to see people transcend the limits of human endurance and athletic achievement. Beyond physical conditioning (which evens out pretty quickly at elite levels), the true battle that allows physical limits to fall happens within the mind.

Matt Fitzgerald lives and breathes endurance sports. His forthcoming book is called How Bad Do You Want It? Mastering the Psychology of Mind over Muscle, and it explores the scientific cutting edge of optimal human performance at a psychological level.

Fitzgerald maintains that the perception of effort—or how hard exercise feels—is the true barrier to elevated performance, not the body. This is the psychobiological model pioneered by Dr. Samuele Marcora, one of the world’s foremost experts on fatigue and endurance performance.

In other words, expecting to feel terrible in a race actually aids your performance. On the other hand, if you tell yourself, “It won’t be that bad,” and it turns out it is, your performance tanks.

Fitzgerald puts it this way in an interview with Outside magazine:

It’s counterintuitive that imagining the “worst case” would enhance performance, instead of a more positive viewpoint, right? Would it also surprise you to learn that this approach to mental toughness is nothing new from a philosophical standpoint?

Over 2,000 years before the development of Dr. Marcora’s psychobiological model, the Stoics of ancient Greece and Rome were embracing the downside in order to overcome obstacles and achieve tranquility. We explored Stoicism a few weeks back with The Ancient Mind-Hack That Makes You Happier and More Effective.

“Behind many of the most popular approaches to happiness is the simple philosophy of focusing on things going right. One way to do this, the Stoics argued, was by turning towards negative emotions and experiences; not shunning them, but examining them closely instead.

Ceaseless optimism about the future only makes for a greater shock when things go wrong; by fighting to maintain only positive beliefs about the future, the positive thinker ends up being less prepared, and more acutely distressed, when things eventually happen that he can’t persuade himself to believe are good.”

This is very similar to what Fitzgerald argues in his upcoming book for endurance athletes. Even better, Stoic thinking maintains that this approach works for life in general. The key is to engage in negative visualization, or as they called it, the “premeditation of evils.”

Here’s one of the more startling examples of negative visualization if you happen to be a parent. Each time you tuck your child into bed, or send them off to school, imagine that this is the last time you’ll see them alive.

It sounds like a horrible thing to consider, and it is. But the result is unexpectedly tranquil—you remain completely present with your children during those moments and beyond, and it becomes impossible to take them for granted. Plus, should the unthinkable happen, you’re actually more emotionally equipped to cope with such a horrifying life event because you've purposefully considered it.

Okay, let’s ramp this down to less disturbing scenarios.

“What’s the worst that could happen?” works well in all types of situations because it takes knee-jerk anxiety out of the equation. Most of the time, we realize that the worst-case scenario is not that bad, or it’s at least something that we’ll easily survive, or best of all, odds are it won't happen at all.

On the other hand, when you nervously try to tell yourself that the worst-case scenario can’t happen, you continue to fuel the phobia by mentally placing it outside of your ability to cope. This has the unfortunate effect of diminishing your performance and your well-being concurrently, which is a double fail.

So, if you’d like to increase your performance at any task and feel better in general, give the “worst-case scenario” approach a try. What’s the worst that could happen?

My current worst-case scenario is not being able to think of something witty for this part of the issue. Ah well …

Great piece that spells out the futility of cardio, the benefits of weight training, and the insidious effects of ego depletion on your attempt to avoid eating too much by trying to “move more.” Keep in mind that this is in the context of losing weight, not general health. Cardio is still highly beneficial to, you know, your cardiovascular system.

“For those of us who live our lives in the real world, there is one branch of philosophy created just for us: Stoicism. It doesn’t concern itself with complicated theories about the world, but with helping us overcome destructive emotions and act on what can be acted upon. Just like an entrepreneur, it’s built for action, not endless debate.”

Stoicism 101: A Practical Guide for Entrepreneurs

It's All Your Fault

“More than we’d probably like to admit so many of our days are spent in a state of self-delusion, an internal monologue of justifying our actions, both good and bad. When we do something wrong, our evolutionary instincts kick in and we do anything we can to not acknowledge the obvious: sometimes, it’s all our fault.”

Why Self-Awareness Is the Secret Weapon for Habit Change

Thanks for joining me once again this week for Further. If I can share beg just once more this week, I promise to also ask again next week. Deal?