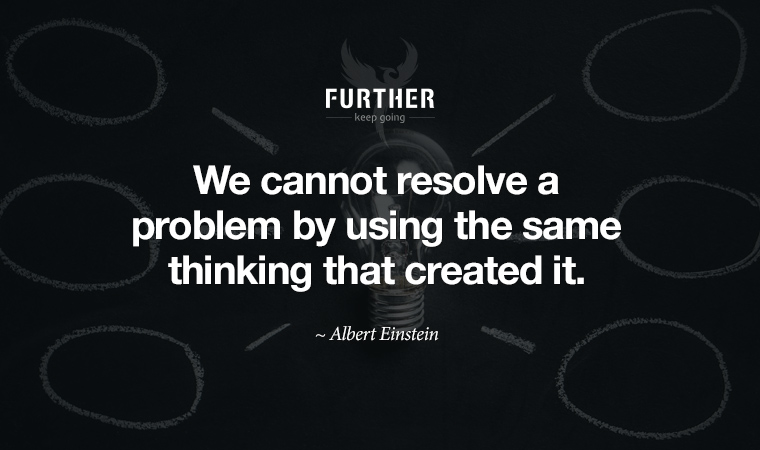 Andy Grove knew his business was about to die. The remarkable thing was what he decided to do about it.

Intel made low cost memory chips, and these chips were quickly becoming commodities. That may surprise you, since Intel is best known for the production of microprocessors, along with that catchy little “sound logo” that lets you know Intel is inside.

At the time, however, the microprocessor business was predominantly controlled by the Japanese. Before Intel could eventually dominate the space, CEO Grove and Intel co-founder Gordan Moore would have to hit the reset button on their entire business.

In his book Only the Paranoid Survive, Grove recalls asking Moore a provocative question: “If we got kicked out and the board brought in a new CEO, what do you think he would do?”

Moore (as in Moore’s law) answered without hesitation, “He would get us out of memories.”

Grove stared at him and then said, “Why shouldn’t you and I walk out the door, come back in, and do it ourselves?”

Seems like a genius move in hindsight, but just think about the courage and humility it takes to kill off a successful business in order to transition to the business you need to be in.

Most company leadership doesn’t have the strength to do this (think Blackberry when confronted with the iPhone), and that’s why companies become irrelevant and disappear. Perhaps that’s why the average age of an S&P 500 company is under 20 years, down from 60 years back in the 1950s.

The irony is that hitting reset on what brought prior success and replacing it with something better has been a winning strategy in contexts throughout history:

In short, prior success is no guarantee of similar results in the future. More often than not, without a “reset” that unlearns the old way and adopts a new and better way, the chance of continued success greatly diminishes.

The Paradox of Success

In his book Unlearn: Let Go of Past Success to Achieve Extraordinary Results, author Barry O’Reilly explains what he call the paradox of success:

While certain methods of thinking and doing may have brought you success in the past, it’s almost certain they won’t reliably bring you success in the future. The key is to recognize the signals and break through before it’s too late.

O’Reilly’s prescription for the paradox is to unlearn, relearn, and only then will a new breakthrough arrive. He traces the idea of organizational “unlearning” to an article written by Bo Hedberg in 1981:

And yet, O’Reilly is quick to point out that organizations don’t learn new things and discard old ways — people do. It’s the people at Apple, Amazon, and Google who make winning decisions, just as it’s the people at Sears, Lehman Brothers, and General Electric who made bad decisions that led to diminished importance (or worse).

It takes strong leadership to avoid holding on to legacy behaviors or outdated thinking simply because it worked in the past. And it takes buy-in from the rest of the people in the organization to execute.

But simply learning new things isn’t enough. Without concurrently discarding obsolete ideas and practices, true progress isn’t made. And as you might have guessed, it’s not safe to count on any particular leader to make the right call — it’s up to you.

One area where this is clear at an individual level is lifelong learning. In the past, what you learned in school and on the job would last you a lifetime. Now, accelerating change makes knowledge from last year outdated in some cases.

In response, hundreds of billions of dollars are spent worldwide each year on employee training and education. And yet, true change rarely happens, because people quickly revert to their old ways of doing things.

JJust like your cable modem needs a hard reset to start working again and even improve performance, you need a system of letting go of what used to work in order to adapt to the reality of the present and the impending future. In other words, you need to disrupt yourself before external forces do the disrupting to you.

Yes, you need to continue learning for life. But to make that learning stick and translate into positive change, you need to concurrently unlearn the ideas, habits, and processes that worked for you in the past but no longer do.

You Must Act to Adapt

In Unlearn, O’Reilly maintains that you don’t trigger a shift in mindset by simply thinking differently; you start by acting differently. When your actions change, you start to see and experience the world differently, which impacts your overall mindset as a result.

This essentially means stepping outside of your normal routine for a period of time and engaging in deliberate practice, which can be a challenge. But I’m guessing you’ve got more than one foot outside of “normal” right now due to the pandemic.

So take the opportunity to unlearn what you know has become less effective already, and may end up obsolete in the new normal. Here’s the three-step system for breaking outdated behavior and thinking:

Simple enough, but what specific actions should you focus on to engage the system? Here are five ways to jump-start the process.

Reset Yourself for Future Success

Futurist Alvin Toffler, who way back in 1970 warned of the shock of accelerating change in the future, once said, “The illiterate of the twenty-first century will not be those who cannot read and write, but those who cannot learn, unlearn, and relearn.”

With the rate of change accelerating each year, and new technologies such as artificial intelligence and augmented reality certain to change your work environment, a process that periodically resets your thinking and behavior will be a necessity.

In fact, it will need to become part of who you are.

Fortunately, O’Reilly asserts that the unlearning process is an ongoing, compounding, and virtuous system. That means the more you use it, the easier it gets and the better your results. But it’s up to you to embrace the process in the first place.