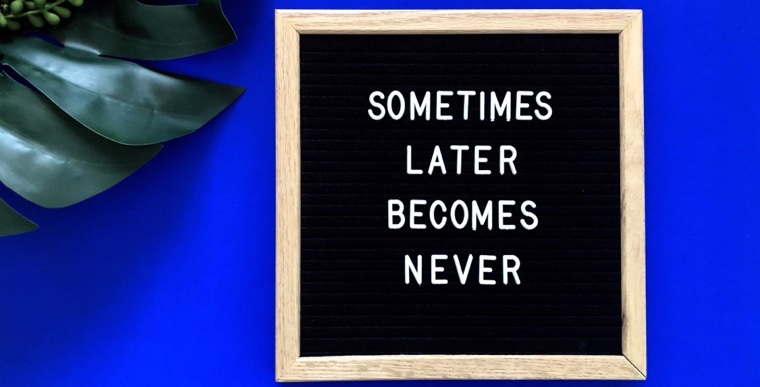 When I procrastinate on important things, I tell myself that I don’t feel I’m ready to do that particular task. It’s not that I’m lazy, because I always do something else that needs doing instead.

Whether that’s literally true or not, research shows that the feeling part is correct. We decide to put something important off and do something less consequential, because we think it will make us feel better (but we still feel kinda bad about it).

Worse, we feel really bad about it later. That’s why the idea is to procrastinate better to avoid self-defeating behavior.

Put off the less consequential thing you’re considering, and do the task you know is more purposeful instead. The key to that little mind hack is understanding why you’re avoiding the more important task in the first place.

Nothing more than feelings

Procrastination is essentially a way to cope with a messy mix of emotions that provide us with motivation (or not). As with willpower, it takes more than our simple notions of self-control to overcome this moody cocktail.

“Procrastination is an emotion regulation problem, not a time management problem,” said Dr. Tim Pychyl, professor of psychology and member of the Procrastination Research Group at Carleton University in Ottawa.

You don’t necessarily control your emotions. But you can become aware of them, let them pass, and then let your logical brain take over and look after your future objectives with the smarter decision.

Team up with your future self

As we’ve explored, our brains value instant gratification over the welfare of our future selves. Neurological scans reveal that we even think of our future self as if it’s an entirely separate person:

When we procrastinate, parts of our brains actually think that the tasks we’re putting off — and the accompanying negative feelings that await us on the other side — are somebody else’s problem.

When I tell myself “I didn’t feel ready” to tackle a particular thing, it’s my way of forgiving myself. But it’s also a point where I take a closer look at my lack of motivation. And it works — at least in the sense that I eventually get the big scary thing done.