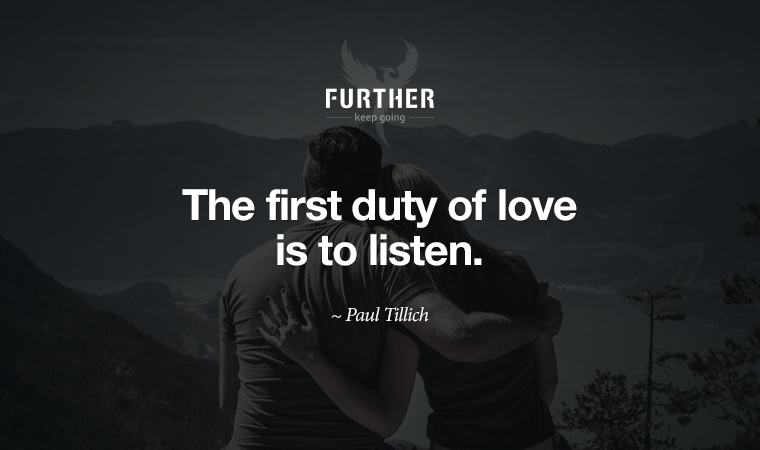 Ours is a sandwich generation in more ways than one. When it comes to communication, our parents were brought up on the idea that “children should be seen, not heard.” And so, we raised our kids to “use your words.”

What’s missing in that equation is listening, the selfless and loving act of paying attention to another person. Compounding the demise of engaged conversation is digital culture, which is all about pushing our narratives on social media and sending messages in rapid-fire texting volleys using smiley faces as stand-ins for emotional connection.

I know, even that last paragraph sounds like a rant. Off the soapbox, then, and on to quietly listening to the wisdom of conversation theorists to help repair our fragmented attention.

The language of listening

My meditation teacher often talks about the difference between being self-centered vs. centered in self. When it comes to making genuine human connections, it’s all about tuning out the chatter in your head that’s dying to make its point in order to be fully present to the person who’s speaking.

As theoretical physicist David Bohm wrote on the paradox of communication:

If we are to live in harmony with ourselves and with nature, we need to be able to communicate freely in a creative movement in which no one permanently holds to or otherwise defends his own ideas.

The language of listening is a dialog, which suggests a “stream of meaning,” not a discussion, which breaks communication down into separate points of view. Conversation isn’t about winning a debate; it’s about losing the perspective that what others have to say doesn’t count.

Getting to the place where you can commit to full-hearted “unselfish understanding” involves clearing the decks for complete concentration. Psychoanalyst Erich Fromm offered six rules of listening, which essentially advocate for openness, empathy, imagination, and love — because “understanding and loving are inseparable.”

In our fractured times, it can be hard to imagine how to have a copacetic — never mind compassionate — conversation. That’s where relationship expert and therapist Esther Perel jumps in with a simple take on reciprocal communication:

The art of conversation is about healthy amounts of both thoughtful speaking and hardcore listening, asking questions and navigating commonalities and differences.

To practice, she offers inviting friends over for dinner to unify on a single, thought-provoking question, like “What is an aspect from your relationship culture that you’re set on changing?” or “What is something that you wished you had known or been told as a child?”

The meat isn’t just in the answers, but in the give-and-take supported by “long, deep listening.” After all, there’s a lot to love about being heard.

The Art of Conversation (Esther Perel)