The Internet is Eating Your Life 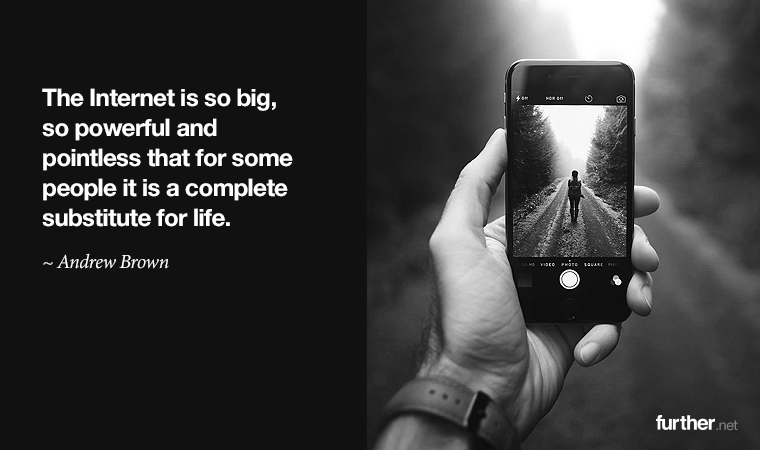 I distinctly remember how excited I was about the Internet back in 1994, as primitive as it was then. My fascination dated back to reading William Gibson novels in the 1980s, long before I ever owned a computer.

Starting in 1998, I began the Internet lifestyle. Once I started publishing online, I effectively started living online, constantly connected.

This was very strange to other people at the time. So, I generally avoided talking about it around “normal” people.

Around 2009-2010, that changed, as the mainstreaming of social media resulted in just about everyone being constantly plugged in. Five years later, we’re all second-guessing whether this is a good thing, even as we are constantly compelled to “see what’s happening.”

In a recent opinion piece in the New York Times, author and consultant Tony Schwartz laments the effect his online habits are having on his life. He also admits that it was easier to give up soda and alcohol than to disconnect from his Internet addiction.

Is addiction too strong a word? From the piece:

Addiction is the relentless pull to a substance or an activity that becomes so compulsive it ultimately interferes with everyday life. By that definition, nearly everyone I know is addicted in some measure to the Internet.

The brain’s craving for novelty, constant stimulation and immediate gratification creates something called a “compulsion loop.” Like lab rats and drug addicts, we need more and more to get the same effect.

The holiday feasting and partying is already in swing, but you don’t have to let it derail your health regimen. Don’t put yourself in the position of having to make a New Year’s resolution to lose the weight, since we know those don’t work.

5 Ways To Fit In Workouts During The Busy Holiday Season

For years we were mislead by recommendations to limit the fat in our diet to no more than 30% of total calories. The result? Not much. But if you truly restricted fat to less than that, say, 10% of total calories? Interesting findings.

Is an Ultra Low-Fat Diet Healthy? The Surprising Truth

Continuing on a theme that we’ve had lately (here and here), here’s another example of how strengthening your mind enhances your physical endurance. And remember, it works both ways.

Building Mental And Physical Strength: My Day Training With the Army Reserve

It’s bad enough when we gain weight over the holidays, and say regrettable things after 3 too many eggnogs at the firm party. To top it off, you end up broke, too. Let’s see if we can avoid that scenario (and maybe lay off the eggnog).

Don’t Be a Quitter

“As the weeks turned into months, my job was taking its toll on me. I began to hate my job. I dreaded going into work. Sundays were the worst day of the week for me. I would regularly use my paid time off to call in sick.”

Kidding … Go Ahead and Quit

I famously quit my job as an attorney in 1998 with nothing lined up. In 2005, I even quit my own business without knowing what the next thing was (it turned our okay). But is this smart behavior?

Is Quitting Without A New Job Lined Up Ever A Good Idea?

“This year I decided to take my mindful practice to the next level by going on a 10 day silent meditation retreat at Spirit Rock in CA. It was an incredible experience that has been hard for me to put into words. The best I could come up with is that it was like a deep tissue massage. Some parts were blissful, others painful, but in the end it was well worth the investment in myself.”

What I Learned from 10 Days of Silence

“It can be scary to ask for help. You don’t want to bother people, and you definitely don’t want to seem incompetent or unprepared. But some recent research from Harvard Business School found something reassuring: When you ask for advice, the people you’re asking tend to find you more competent, not less.”

Love of Life: Albert Camus on Happiness, Despair, the Art of Awareness, and Why We Travel

Okay, you should really log off for a bit. Just make sure to share Further before you go: