Build Your Body to Ignite Your Mind 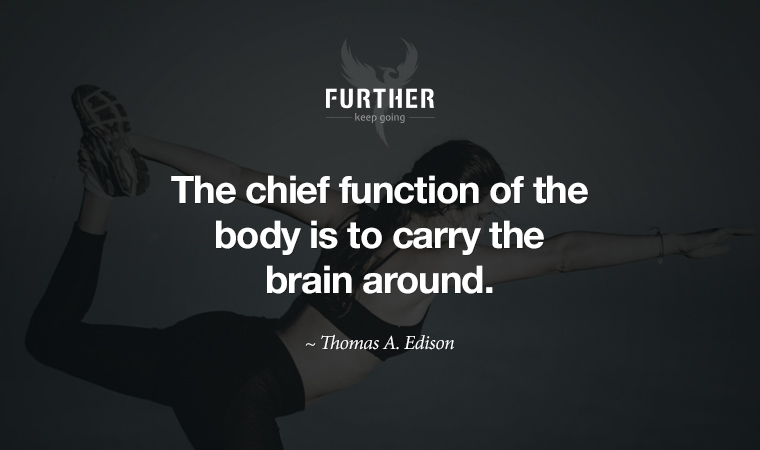 Last week we explored how to protect and expand cognition, basically by pushing our brains in new and challenging ways. But what if I told you that peak brain performance requires that we work our bodies hard as well?

Beyond simply increasing blood flow to the brain (which never hurts), a large volume of research continues to show that exercising your body permanently enhances your brain. And it’s not like taking care of your body doesn’t have its own benefits.

The bottom line: physical activity improves brain health and cognitive function at any age. If the baseline science behind this interests you, I highly recommend you start with Spark: The Revolutionary New Science of Exercise and the Brain by John Ratey, MD, clinical associate professor of psychiatry at Harvard Medical School.

Spark was inspired by an experimental approach to P.E. in Naperville, Illinois schools. The plan seemed ridiculous at a time when American schools were cutting physical education in favor of more emphasis on math and science, but the results were unmistakably profound.

The student body of 19,000 transformed into perhaps the fittest in the nation. More remarkably, the P.E. program that started each school day also turned those students into some of the smartest on the planet. In 1999, Naperville’s eighth graders were among some 230,000 students from around the world who took an international standards test called TIMSS — and they finished first in the world in science and sixth in math.

That’s not a story we hear much about with American kids. It’s usually falling test scores and rising obesity rates, and it seems the solution to both problems is a commitment to fitness. It’s the same story for adults.

Best part, it only takes about 20 minutes of exercise to benefit both brain and body. So, even if you’re okay with that beer belly, maybe get moving for the sake of your mind?

In the spirit of movement, let’s move on, shall we?

Speaking of that beer belly, you’ve resolved to hit the treadmill or the trail, right? Not so fast, sparky. The best move might be to get yourself into the weight room according to new research headed by Rania Mekary of the Department of Nutrition at Harvard School of Public Health.

If you’re the type that’s not into traditional aerobic exercise like running or cycling, but you dig yoga, you’re in luck. Yoga has the potential to reduce risk factors of cardiovascular disease.

I found this useful and well done – How To Eat Healthy: 5 Easy New Tips From Research. If you don’t have time for that, just don’t eat anything containing high fructose corn syrup, ever.

Yes, it’s that bad. Also, this is how the dark side of food science work against you.

Retiring at 27: Ambitious, Lazy or Crazy? Interesting read, and it doesn’t take much to see that this guy intends to push it further … just on his own terms. That’s one of the beautiful things about modern entrepreneurship, even if you never get the big cashout. And if freedom of choice and working from anywhere isn’t enough, just think of all you’ll save (monetarily and otherwise) if you didn’t have to commute.

If you do intend on starting a business in 2015 (or growing the one you have), make sure you’re up on the micro and macro trends (as opposed to fads). Check out Trend Watching for 2015 consumer trends — it’s a great starting point for market research and inspiration.

I’m not an active stock investor, because it’s smarter for me to pay attention to other things. Plus, a study by Dalbar Inc. in 2003 showed that from 1984-2002 the average annual return of the S&P 500 was 12.2%, while the average annual return achieved by mutual fund managers was only 9.3%. The edge on returns is still true today, which means most people are better off putting their money in an index fund.

But here’s a twist. Index funds typically lose the benefits of harvesting stock losses and re-investing them to increase long-term returns. Now there’s a new category (and technology) that allows all the hands-off benefits of index funds with the tax savings formally afforded only individual stock investors. Financial nerdness for the win.

If we’re talking about Abraham Maslow’s hierarchy of needs, creativity is a prominent example of our drive for self actualization. But if you ask bestselling author Daniel Pink, creativity may be the only thing that keeps you from being replaced by a robot or an algorithm.

So let’s kickstart our creativity to kick off 2015:

A big chunk of what determines your happiness is all in your perspective. Conversely, chronically unhappy people have some fairly uniform perspectives that can be changed. More interesting, perhaps, is that our perspective about time (notably “time is money”) also leads to the experience of “time poverty.” Hopefully you’re not too time poor to pay attention. Heh.

Everyone loves motivational quotes, especially if one actually motivates you to do something. Give it 102 shots here. Meanwhile, here’s one of my new favorites:

“Remember that happiness is a way of travel, not a destination.” ~ Roy Goodman

Say adiós to 2014 today, at least for Further … but we’ll be back with the next issue on Monday, January 5, 2015. Please share Further with a friend, family member, or colleague who needs a great start to the new year (you know you have at least one). 😉