Three Real Ways to Protect and Enhance Your Brain Power 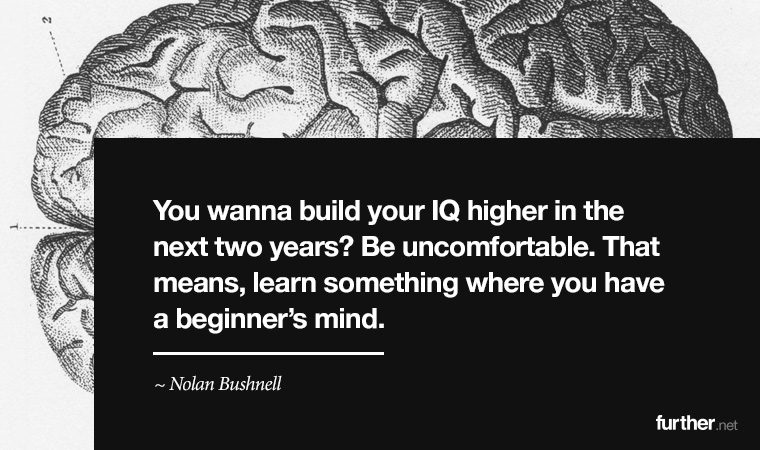 No one likes the idea of cognitive decline. The prospect of our memories and clarity diminishing as we age is frightening, never mind full blown dementia or Alzheimer’s.

And where there’s fear, there’s money to be made. Unfortunately, research shows that self-directed brain games offered by subscription websites like Lumosity have no measurable benefit.

Since we like reliable research here at Further, what works to protect yourself against mental decline? Here are three scientifically-validated practices that not only work, they enhance the quality of your life in a way “brain games” cannot.

Research by the Center for Cognitive Aging and Cognitive Epidemiology finds that those who do mentally challenging work are cognitively stronger as they age. This happens by essentially strengthening neuroplasticity — “the brain’s ability to form new neural connections, new associations, and thus, better function.”

This extensive Scottish study that followed 1,066 people from childhood to age 70 corroborates a 2008 study finding that people who engaged in daily 10-minute conversation about social issues fared cognitively better than a TV-watching control group. So, maybe level up your employment or get some mentally-challenging hobbies?

That neuroplasticity does decrease with age, which is why it’s harder to learn a new language as an adult than as a child. But it’s not only doable, it’s good for your brain because it’s also putting it to work.

Per an article in The Guardian reviewing the science: “A number of recent studies suggest that learning a foreign language can slow this inevitable age-related cognitive decline or perhaps even delay the onset of dementia.”

“Is it as easy to learn something when you’re 65 as it is at 5? No. But can it be done? Yes.” That’s according to Norman Weinberger, a neuroscientist at University of California Irvine.

As with complex work and learning a new language, studying music as an adult protects your cognitive abilities. And especially in the case of learning to play an instrument, your brain is actually enhanced, no matter what age you start.

Why do some people call themselves gurus? Because “charlatan” is too hard to spell. Last week we blamed Oprah for endorsing positive-thinking tripe that doesn’t work with The Secret. This week, it’s her man Dr. Oz. A new study powered by real-world doctors finds that half of his medical advice is baseless or wrong. Nice.

If you’re already sweating the weight you’ll gain this winter, here are some ideas for preventing the heft from happening. Here’s what worked for me, though: What 2,000 calories looks like (single meals with enough calories for an entire day — you’ll be shocked).

Can’t someone just finally invent an exercise pill to replace the treadmill, and spare us the inconvenience of self control? Well, don’t look now, but scientists at the Harvard Stem Cell Institute are working on it, and making real progress. Wouldn’t this be cheating, though?

Want to be more successful, and like to learn by anecdotes? Well then, Fast Company has you covered with the common traits of the most successful people. Not yet satisfied, FastCo then posted 7 New Habits Of Highly Successful People. If you prefer to go with something a little more research based, find out why being open to experience and conscientious are four times more important than IQ.

I can tell you from experience (learned the hard way) that one of the key attributes of successful people is to leverage the talents of others so they can focus on what they’re good at it (and love). This article on the topic of delegation is worth your time.

For such an intangible concept, money sure does mess with our heads. The stories we tell ourselves about money impact how much we have and what we do with it. So what happens when those stories are lies?

If you’ve noticed a theme to this issue (and of Further in general), it’s that you need to push it (push it real good). So dust off that Salt-n-Pepa cassette and understand that you need to get out of your comfort zone to live your best life.

I don’t bother with New Year’s resolutions, since only 8% of people who make them stick to them, and those who don’t usually abandon them after just one week. In fact, resolutions can even be viewed as harmful. What if you resolve to instead break some of the most common resolutions and try some other things? At least you’ll impress your hipster friends with the novelty factor.

Fine, fine … make your resolutions. I can’t stop you. But maybe focus on developing some of these 14 daily habits of exceptionally happy people. Things like gratitude, life-long learning, consideration and passion never go out of style. Unlike, for instance, that comically large Pharrell hat your cousin wore at Thanksgiving dinner.

Sad to say, it’s time to say goodbye for now. Did you miss last week’s issue of Further? Check it out in all of its continued relevance here. And please share with a friend. 🙂