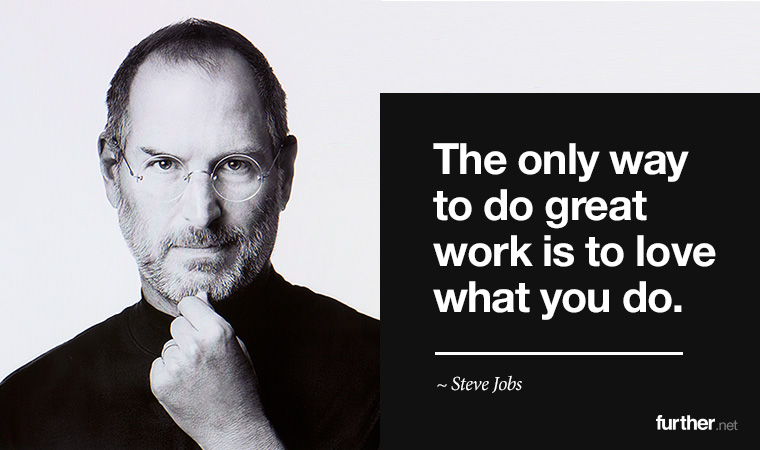 Steve Jobs would have turned 60-years-old last week. Apple CEO Tim Cook honored the company co-founder by tweeting a partial quote that has come to exemplify the man.

Remembering Steve, who would have turned 60 today. "The only way to do great work is to love what you do." pic.twitter.com/0YD0gZ7jvm

Here’s the context of that line, from the famous Stanford commencement address Jobs gave in 2005:

“You’ve got to find what you love …. The only way to do great work is to love what you do. If you haven’t found it yet, keep looking, and don’t settle.

This advice has been reduced to the common refrain of “follow your passion.” You’ll find it all over the career section of any bookstore, and see it tossed out by online gurus of every stripe.

Sounds fine, except research shows that following some abstract passion is not how most people find work they’re actually passionate about. Rather, this mindset tends to lead to anxiety, chronic job-hopping, and poor performance while the unfortunate soul waits for “passion” to magically reveal itself.

In my case, I had no idea what I wanted to do with my life. I wasn’t even sure I had a passion, much less one that would pay the bills.

I was a psychology major in college, simply because it interested me. I had no specific career objectives, so naturally I went to law school. At least my mom would be proud, I thought, if I pursued a professional career.

Indeed, I did become an attorney … and hated it. Like a lot of unhappy attorneys, I “decided” that my passion was actually writing. Unlike most attorneys who become trapped by the salary and illusion of prestige, I quit my high-paying job after only four years and tried to make it happen.

To make things worse, I didn’t want to beg a New York publisher or a Hollywood producer for a writing gig. It was 1998, and I figured that I could find a way to make a living writing online.

That still sounds crazy to most people in 2015, right?

Now, what I was actually setting out to do was to start a business. And yet, I had never taken a business class, never read a marketing book, never once thought of myself as an entrepreneur. My cluelessness was an asset, because the Internet turned a lot of conventional wisdom on its head.

Through the process of starting one company that failed, and one that didn’t, I discovered something important—I loved starting businesses. Rather than a traditional writer, I was an entrepreneur who could write, and that's led to seven more successful businesses.

Hopefully I'm not done yet.

But I didn’t follow my passion—because I didn’t really have one to begin with. I found my passion by doing something I never contemplated wanting to do.

In his book So Good They Can’t Ignore You: Why Skills Trump Passion in the Quest for Work You Love, Cal Newport debunks the long-held belief that “follow your passion” is good advice, and I agree. The key to finding work you love is more in working right rather than trying to find the right work.

Newport takes particular issue with Steve Jobs and the quote cited above for perpetuating the myth of the “passion hypothesis.” Jobs was a college dropout more interested in Zen retreats, Western history, and organic farming than technology. In fact, it was Apple co-founder Steve Wozniak who had the passion for computers.

Jobs teamed up with Woz to make some fast cash off the emerging computer-enthusiast culture. And yet, this is what led to the founding of Apple Computer a year later, which gave birth to some of the most innovative work the world has ever seen.

Newport thinks that you should “do what Steve Jobs did, not what he said.” But look at the quote again. Jobs said find your passion, and to keep looking until you do. That’s exactly what he did, what I did, and what countless others do to find work that matters.

The distinguishing point is how the search is performed, and what it means.

In a poignant clarification at the end of his life, Jobs told his biographer Walter Isaacson, “It's not all about you and your damn passion. You need to get out there and make a dent in the universe.” In other words, do something meaningful for others.

Bring a passion for excellence to any job you do, and as Steve Martin said, “Get so good they can’t ignore you.” It’s the process of doing great work that reveals the passion, and the next step on your career journey will make itself abundantly clear.

If you’re struggling to find work that provides meaning, I highly recommend you read So Good They Can’t Ignore You. I would have killed to have this perspective in my twenties, and could have avoided all that time dreaming of fronting a grunge band despite lacking a shred of musical talent.

Enjoy sitting around in a towel with other sweaty people? Lucky you: The Strange Connection Between Saunas and Longevity. If that doesn't work for you, let's revisit that whole not eating so much thing: Feast And Famine Is A Pretty Good Diet For Longevity.

My wife told me I should cover bone broth in Further. I was like, “Whaaa?” Apparently, I'd missed something that's already passé with celebrities: Beyond Bone Broth: 9 Ways Hollywood Will Halt Aging In 2015. (Damn you George Clooney.)

This is somewhat heartbreaking and inspiring all at once: The App That Tricked My Family Into Exercising.

In my line of work, David Ogilvy is a patron saint when it comes to building businesses and wealth. If you don't have time to dive into these tips (you should, you know), at least take this: “If you ever find a man who is better than you are—hire him. If necessary, pay him more than you pay yourself.” (I'd actually substitute her in there.) David Ogilvy’s Timeless Principles of Creative Management.

Whatever you do, don't put this off until later: The best tip for defeating procrastination ever. Or, you could always get your to-do list done by using these two easy ways to trick yourself into thinking you have more time.

We've talked about why it may be safer to go out on your own than have a job, and there's good news for small business owners in general: “Over all, since 1990, small businesses have added millions of employees, while big businesses have shed millions.” While you're figuring out your business, here's what to do with the money you already have – How to save money: 33 great personal finance tips.

Mindfulness is our natural state, how we all begin until it gets conditioned away. Need proof? Watch a child at play, or just how they walk down the street. How to Learn Mindfulness From a Child. The latest news says that meditation can help you sleep better. If you're starting to lose track of the multitude of benefits that come from meditation and mindfulness, here's a handy visual aide.

Beyond mindfulness, a child’s brain can master anything from language to music. Can neuroscience extend that genius across the lifespan? Before you think on that one too hard before simply clicking the link to find out, remember that cognitive exhaustion is a real thing. That's why I provide links with these intriguing questions. Take it easy every once and a while. 😉

You certainly can't claim to be wise if you're wrong about basic stuff. Relax, I've got you covered. Here's an infographic with the facts on some of the world's most contagious falsehoods.

And … I'm spent. Actually, I've got to get to the day job. I'd love it if you shared this issue of Further while I'm away:

I'm not even going to mention the archives this week. You know where they are.