The Three Words that
Lead to Better Decisions 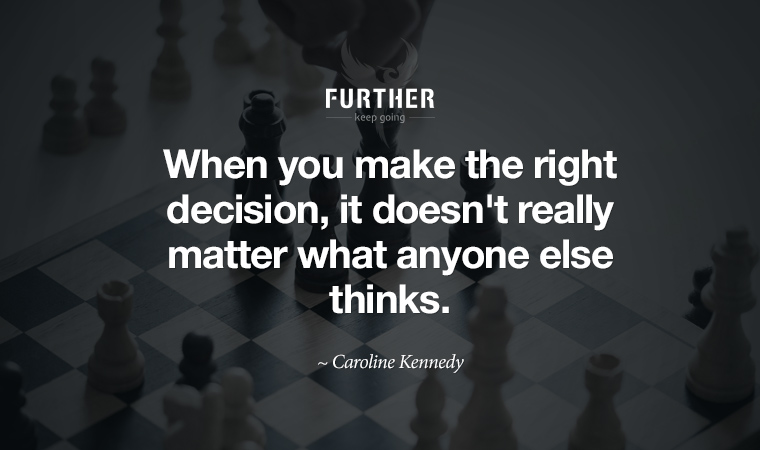 Nick Saban is one of greatest coaches in college football history. He’s won three BCS championships with Alabama and another with LSU.

Saban is also respected in business and personal growth circles for his philosophy that’s led to those championships. Specifically because that philosophy does not focus on winning championships, or even individual football games.

Rather than outcomes, Saban focuses on process. He encourages his teams to foster a commitment to practicing the individual actions that lead to excellence, and therefore to favorable outcomes. In Saban’s words:

It’s the journey that’s important. You can’t worry about end results. It’s about what you control, every minute of every day. It’s a process.

When you focus on process, you concentrate on doing instead of becoming. You create beneficial habits instead of chasing goals — goals that tend to lead to short-term thinking and even motivate some people to lie and cheat.

That’s not to say that having goals is a bad thing. It’s just that having a goal alone, with the focus on a specific end result, turns out to be a pretty poor way of achieving that goal.

Plus, goals have distinct endpoints that encourage you to revert to your previous state. Once formed, habits stick around and become automatic, leading to long-term beneficial change.

James Clear, author of Atomic Habits: An Easy & Proven Way to Build Good Habits & Break Bad Ones, sums it up succinctly in a tweet:

New me… “I should build better habits. X will come in time.”

Hands down, a focus first on developing better habits will in turn achieve better end results. So can we also devise better habits to improve the decision-making process?

Is the Decision-Making Process Different?

Let’s stick with football examples, this time from the NFL. It’s Super Bowl XLIX, the Seattle Seahawks versus the New England Patriots in 2015.

There are 26 seconds left in the game. The Seahawks are trailing by 4 points, but they have the ball at the Patriots’ one-yard line. It’s only second down.

In Seattle’s backfield is Marshawn Lynch, one of the best running backs in the league. Everyone — especially the New England defense — expects the hand-off to go to Lynch for a push into the end zone.

The resulting criticism of Seattle coach Pete Carroll was brutal. The play call was labeled the “worst” and “dumbest” in Super Bowl history. It was certainly a heartbreaking result for most everyone outside the Greater Boston metropolitan region.

And that’s the problem. You can’t judge the quality of a decision by the result, because few scenarios provide 100% certainty.

From a probabilistic standpoint, Carroll made a solid call. The Patriots were anticipating Lynch getting the ball, it was only second down, and an incomplete pass would stop the dwindling clock while an unsuccessful run wouldn’t. And based on league statistics for that season, the odds of Wilson’s pass being intercepted from that place on the field were close to zero.

Except “close to zero” still leaves room for another outcome, and the odds went the other way. Bad luck and improbable results happen, regardless of the quality of our decisions or skill of our execution.

Put another way, let’s say the play works. Pete Carroll is lauded as a gutsy genius who out-coached Bill Belichick, and the Seahawks are celebrated as fearless Super Bowl champs. And yet the decision remains exactly the same.

Carroll’s reasoning was statistically sound. It only became the “dumbest decision ever” because, despite otherwise favorable probabilities, it didn’t work. Any decision that lacks 100% certainty of outcome has the potential to go in an unfavorable direction — and that’s true of most decisions.

Over time, however, consistently better decisions add up to better results. You just can’t let the goals you hope to achieve by your decisions dictate the process by which you make them.

Unfortunately, that’s exactly what most of us do.

Life is Poker, Not Chess

People like to equate life decisions with the strategic game of chess, but that’s a poor analogy. With chess, the pieces are all out there for the players to see; there’s no hidden information and very little luck involved. It’s purely a game of skill, and barring a glaring mistake, the better player usually wins.

Poker presents a more useful analogy for the real world. While also a game involving skill, there’s a ton of uncertainty. The luck of the draw is a very real factor. You can make great decisions with any single hand of poker and still lose.

Such is also life. So perhaps we should treat life more like poker, which is exactly what Annie Duke argues in her book Thinking in Bets: Making Smarter Decisions When You Don’t Have All the Facts.

The title reflects the key point — all of our decisions are effectively bets, but we don’t tend to think of them that way. When we make bets, we’re consciously aware that we may lose. Or in other words, we know that our decision may end up with a result other than what we’d like.

As Duke says in her book:

What makes a decision great is not that it has a great outcome. A great decision is the result of a good process, and that process must include an attempt to accurately represent our own state of knowledge. That state of knowledge, in turn, is some variation of “I’m not sure.”

When you think in terms of probabilities instead of working backwards from end results, you recognize that your decision may have been a good one regardless of the fact that it turned out badly. Maybe you didn’t have all the necessary information, or perhaps you were just unlucky.

Introducing “I’m not sure” into your decision-making process (and being okay with it) not only more accurately reflects reality, it also keeps you out of the trap of black-and-white thinking. Recognize that decisions are about shades of grey more than simple notions of right or wrong, and navigating those shades becomes a habitual skill that leads to better outcomes, more often.

According to Duke, the way our lives turn out comes down to skill and luck:

But, as you might have guessed, that’s not how most humans deal with life.

This predilection is known as self-serving bias, and it means instead of gaining wisdom from our experiences, we rationalize to make ourselves feel (and look) good. This leads to entrenched beliefs about our skill and luck, which in turn spark confirmation bias and motivated reasoning — our tendency to seek out and more readily accept information because we already believe it.

As you might have guessed, this is not a recipe for personal growth or better decisions. Instead of learning from our mistakes, we find ways to tell ourselves we were just unlucky, not wrong.

Instead of fighting this aspect of human nature, we can modify our habits related to outcomes in order to make increasingly better decisions. The way to do this is not through the sheer will it takes to overcome the way our brains work, but by changing the portion of the existing habit that is most susceptible to substitution.

Habits are a neurological loop made up of a cue, a routine, and a reward. In The Power of Habit, author Charles Duhigg explains:

First is the cue, the trigger from the environment that tells your brain to go into autopilot and which habit to use. Next is the routine, which can be a mental or physical action you take whenever presented with the cue. And lastly is the reward, which is what you get from the habit that fulfills a craving in your brain.

Duhigg says that the best way to change a habit is to maintain the cue and reward, but insert a substitute routine. Here’s how that can work in the context of decisions.

The outcome of a decision is the cue. A good result cues our routine of self praise for making a great decision, resulting in the reward of positive self esteem. A bad outcome cues the routine of blaming bad luck (or others) to achieve the reward of avoiding a ding to our self esteem.

Much like Pavlov substituted a bell to cause dogs to salivate in anticipation of food, we can substitute a different routine in between the outcome of a decision and the desired reward. Annie Duke argues that whether the outcome of a particular decision is good or bad, the new routine should be to examine each element of the decision as a learning opportunity that leads to improvement.

You still get the esteem reward that comes with laudable learning behavior, but you’ve shifted the routine to a focus on constant incremental improvement rather than self praise or blame shifting. This means you’re always focused on the individual actions that lead to excellence in decision making, which increase the probability of favorable outcomes in the future.

It can be somewhat maddening to realize that the best way to achieve a goal is to ignore the goal, and focus instead on creating an underlying habitual process that ultimately puts you in position for achievement. It’s likely even more frustrating to accept that the way to make better decisions is to ignore the outcome of your decisions.

Of course, just as if your new habit of eating better food (and less of it) fails to result in weight loss, you’d also want to examine and adjust your process if your decisions routinely turn out badly. That doesn’t invalidate the importance of process; it emphasizes the importance of identifying and learning from the mistakes in your process.

Playing the probabilities means, by definition, that your decisions won’t always go the way you want them to (just like now). But if your thought process is sound, you’ll make better decisions overall, which over time will lead to big changes.

As James Clear says, almost every habit you have — good or bad — is the result of many small decisions over time:

In the beginning, there is basically no difference between making a choice that is 1 percent better or 1 percent worse. (In other words, it won’t impact you very much today.) But as time goes on, these small improvements or declines compound and you suddenly find a very big gap between people who make slightly better decisions on a daily basis and those who don’t.

Think of it like a ship sailing from New York to London. If the ship’s navigator introduces a one-degree navigation error, it would start off as barely noticeable. Unchecked, however, the ship would veer farther and farther off course and would miss London by miles, as that one-degree miscalculation compounds mile over mile. Thinking in bets corrects your course. And even a small correction will get you more safely to your destination.

Like any worthwhile change, improving your decision-making process is not easy. But it can be simple to get started.

You begin by treating every decision as if it’s a bet, and you’ll naturally contemplate just how sure you are about your wager. That’s what poker players do, and surely your life is the highest stakes game in your town, right?